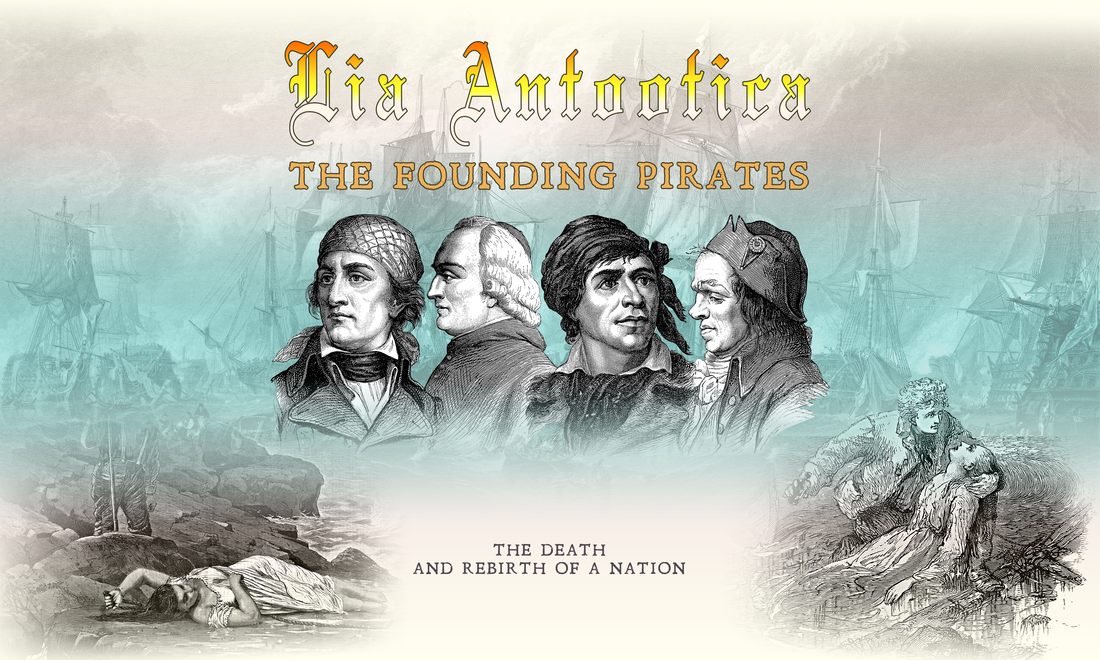 THE FOUNDING PIRATES
THE DEATH AND REBIRTH OF A NATION
VALSLAND, LIA ANTOOTICA – The history of Lia Antootica comes with a nasty past that some still view as adventurous while others see as cold-blooded.

In the early days of Blissdaine Naive a vicious, murderous act was perpetrated on the Ereny Royal family by a ruthless band of pirates led by a group of criminals who called themselves, The Founding Pirates.

Lia Antootica was a peaceful country led by the popular and much loved Ereny monarchy. King Bator Ereny was an honorable and just leader who created a prosperous and fair country. Queen Nana Ereny was kind and beautiful and a wonderful mother to the Princess, Feny Ereny. The Princess was a highly intelligent and eager woman of 21 years. The entire Royal Family was well liked by the Lia Antootica population.

The land was run well by the Government and there was much wealth and little poverty on the large island nation. With so much to be thankful for and so little strife, Lia Antootica was the perfect target for the ruthless pirates who had planned the attack on the prosperous nation for years.

It started late one night while the Queen and Princess slept and the King met with his Generals in his war room. Word had reached the Generals that an attack was eminent from an unknown force. It is believed that the Pirates had already infiltrated the country by this time and the Pirates easily took the Palace by storm that night and captured the Royal Family and murdered the Generals. After a display of humiliation, the King was murdered, while the Queen and Princess were taken to sea, tied up and thrown overboard. Their bodies washed up ashore for the Antootican people to find.

The act shocked the nation and the following day a full attack on Lia Antootica was launched and the leaderless Antootica military was easily defeated by the Pirates. The take over was swift and the country’s institutions were converted nearly overnight. The Antooticans were heart broken and at a loss.

Although the world was outraged and angered when the news made it out, little could be done immediately. The Pirates were well formed and there were thousands of them. Lia Antootica had little choice.

To survive, the Antooticans went about their business. To help control the citizenry the Pirates implemented a sinister deed. They introduced banknotes with images of The Founding Pirates on the obverse of the notes and images of the murdered Royal Family on the reverse. This would serve as a reminder to the people that the Pirates were in charge. They wanted the citizens to see their dead King and Queen throughout their daily routine. It was a warning of what they faced should they step out of line.

The Kalozkodas Bank and the illegal pirate nation lasted roughly 7 years due to short-sighted decisions made by the Founding Pirates themselves. The mere idea of allowing other pirates to migrate to their shores was a foolish policy. No immigrant procedure was implemented and soon pirates were pirating pirates. Anarchy ensued. The unorganized Lia Antootica military was ill-equipped to handle the fighting and mayhem. Many of the soldiers joined the pirates. To make things worse for the Founding Pirates, their new Sivar currency found its way to other shores and governments. The mistake of using their own images on the banknotes proved to be their final demise.

In the end, several nations joined forces to attack the pirate nation to return Lia Antootica to its people. The Founding Pirates were rounded up by the Yaff Multi-Coalition Army, using the Lia Antootica banknote images for positive identification. All Founding Pirates were put on trial, found guilty and executed for their crimes. The surviving Pirates fled but were hunted and captured throughout the world for years to follow.

Lia Antootica would return to the peaceful entity it always was with a much wiser government.  They built up a strong military. They would not be subjected to that humiliation ever again.
STORIES:
MUJAND REPUBLIC     TERRITORY OF WEST JUNEE     THE KUNINGANNA TERRITORY     NATION OF ANDAQESH     PERISH ISLAND     PONEET ISLANDS     EKLISIVIA        SIMA SENCO     LIA ANTOOTICA