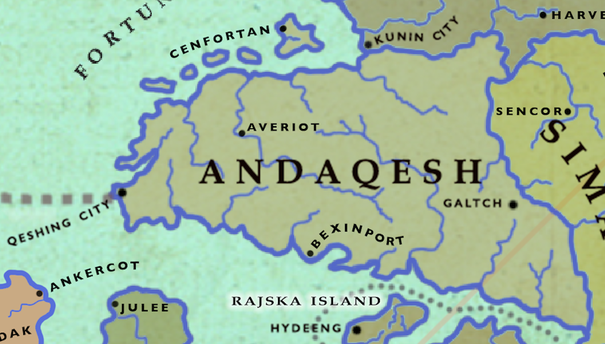 THE END OF THE QESH MONARCHY
A Nude Queen's Revenge
The nation of Qeshland is the earliest established country on Blissdane Naïve officially documented as year 1. The Qesh Royal Family controlled Qeshland and several Territories, Commonwealths and Colonies for centuries under rule of the Monarchy. A few rebellions threatened royal power but all were squelched. In 958 MT, Princess Anya Qesh, daughter of King Astar Qesh, witnessed her childhood friend, Galtch Predit, die as her father defeated another rebellion.

Anya was 16 years old and Galtch, it turned out, was a spy for a new rebellion. His close friendship with Anya placed him in a unique position to gain access to monarchy secrets. When caught, Galtch was put on trial. Although Galtch innocently incriminated himself, the Court believed that at 15 years old, he was too young to willfully conspire with the revolt and that the true traitors were in hiding. Despite the Court’s verdict of Innocent, the King wanted to send a message and the boy was beheaded for treason. Many people never forgave the King for this act—including his daughter, Anya.

In 970 MT, King Astar Qesh died suddenly and mysteriously. The cause of his death could not be determined. He was found alone slumped over at his writing table. Neither wounds nor other ailments were present.

With Queen Ganna Qesh’s death five years early from similar mysterious circumstances, this left Princess Anya in line to inherit the monarchy. At the age of 28 the Princess inherited the monarchy to become Her Royal Highness Queen Anya Qesh, a title she never loved and would end eight years later.

Rumors spread that the Princess had her Father poisoned to start a rebellion against the Monarchy. The King's two Brother's and one Sister both pointed fingers at their Niece as the source behind the King's demise. Brae Qesh was the most vocal while younger brother, Fraimon Qesh and sister, Bleyteek Qesh Karrow grumbled furiously in the background.

Upon taking control of the crown, Anya immediately started to dismantle the monarchy, which her Father’s siblings believed as proof of her guilt. Anya ignored them and relieved Royal Government members of their duties who she believed were still loyal to her Father and could possibly threaten her reign. Next, she reduced her Uncle and Aunt’s yearly stipend and eliminated their governmental influence by removing them from the Council of Alms. She refused to see them or allow them into the Royal Palace.

Next, she started a campaign of embarrassing the monarchy by posing for her portraits in the nude. The Royal Family was outraged.

Attempts were then made on her life but all failed. As a result, a small guard service was established to protect the Queen. Cloddier Bannet, a young military Captain, led this guard unit.

The people of Qeshland were emboldened by Anya’s defiance and one autumn night in 977 MT, Queen Anya, with five loyal guards led by Cloddier Bannet, secretly left the palace to meet with Gundt Wintidore leader of the rebellion. A rebellion, it was later learned, she was financing. She assured them that the rebellion would be won without one death and in the last days of 977 MT the girl who would not be Queen orchestrated the end of the Qesh Monarchy. With enough people supporting the Queen, she simply handed Qeshland over to the people.

As she promised and wished, not one person was killed in the rebellion. In 978 MT the Government was formed with the help of the Monarchy. The country adopted a Democracy and elections were held. The new name for the country was set to be Anyaqesh but she begged this not to be. When the newly elected officials started to move into their positions, Gundt Wintidore stated publicly, “We have the People and a Qesh.”

The Nation of Andaqesh was born. First president elected to office was Gundt Wintidore. The other members of the Royal Family gathered their riches and loyal servants and fled to Mindeny (now Qeshtan United) a nearby country which adopted the Royal Family. Within a few years and a few million ervecent gold coins, the Qesh Royal Family gained power and control of Mindeny changing the name of the country to, Qeshtan Commonwealth.  A Monarchy and The House of Panner was established in 985 MT. It wouldn’t take long before the Monarchy built up a massive army and set its eye on Andaqesh to avenge the rebellious coup. It was a bloody failure and the Royal Family lost its new country’s trust and loyalty. The Monarchy was toppled and the Royal Family was executed for treason. Anya was thought to be the last Qesh.

In 998 MT, the Qeshtan Commonwealth changed its name to Qeshtan United and made peace with Andaqesh by paying for the war they had started. The Treaty of Gannastad was signed and all former Qeshland ruled countries proclaimed their independence. (Territory of West Junee, Kuninganna Territory, Sima Senco, Territory of Kumad, Indir Catan.)

All former Monarchy ruled territories celebrate the history of Anya Qesh's reign and remain close allies to this day.

ANYA QESH
Anya Qesh settled into her new role as citizen and married Cloddier Bannet, her loyal guard. They moved to Kuninganna Territory and lived their peaceful lives raising farm creatures and their two children, son Cloddier Bannet II and daughter Ganna Anya Bannet. Captain Cloddier died in 1012 MT. Anya followed him a year later in 1013. (A controversy surrounding the circumstances of her death has emerged. Notes found in the palace of Dari Bastik may tell a different story.)
RUMOR
A farming neighbor of the former queen reported seeing a woman and man visiting the Bannet farm on several occasions. This was not unusual in itself but the Farmer swore the woman looked like a youthful Queen Ganna Qesh.
See the Nation of Andaqesh banknotes
MORE STORIES:
MUJAND REPUBLIC     TERRITORY OF WEST JUNEE     THE KUNINGANNA TERRITORY     NATION OF ANDAQESH     PERISH ISLAND     PONEET ISLANDS     EKLISIVIA     SIMA SENCO