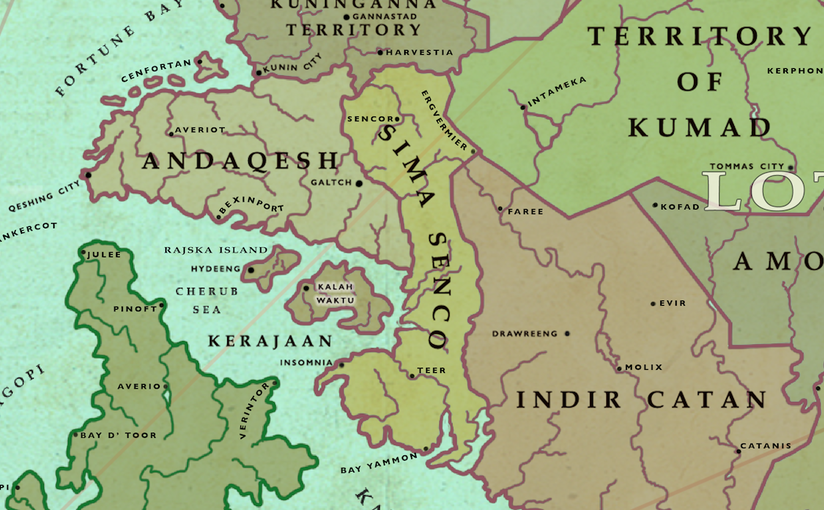 THE  LAND OF ART AND SCIENCE
Located in the old continent of Lothandizia, Sima Senco shares borders with Kuninganna Territory, Territory of Kumad, Indir Catan and one of the most influential and powerful countries in the history of Blissdane Naive; The Nation of Andaqesh, formerly Qeshland.

Since early times, Sima Senco has been known as the land of art and science, with most of its resources being dedicated to these two disciplines. Due to this focus, Sima Senco’s military might was limited and through the centuries the country found itself in many skirmishes. Ultimately it was left weakened and ripe for conquering.

Qeshland and King Astar Qesh conquered Sima Senco in or near 970 MT. The King however, was wise to recognize Sima Senco’s resource of craftsmen, artists and scientists and chose to nurture their progress. To his credit he left Sima Senco in tact and made certain other countries did not interfere or use any military might against the newly conquered territory.

In 977 MT, Qeshland was defeated from within and Sima Senco, along with other Qeshland territories, were now and forever independent.

Sima Senco in modern times is still known as, The Land of Art and Science and has flooded the World Patent and Copyright Office with many inventions and many works of arts, including music and the written word.

The country’s economy is one of the most robust on Blissdaine Naive and continues its long reputation as the place to go for new thought. Their currency is strong and the future remains bright.

Critics and politicians from neighboring countries and around the world do site Sima Senco’s continued pattern of limited military force as a problem and warn that this could some day bring aggression from the less globally engaged countries.

Sima Senco insists it is neutral in all world conflicts and will continue its development of all things regarding the mind.