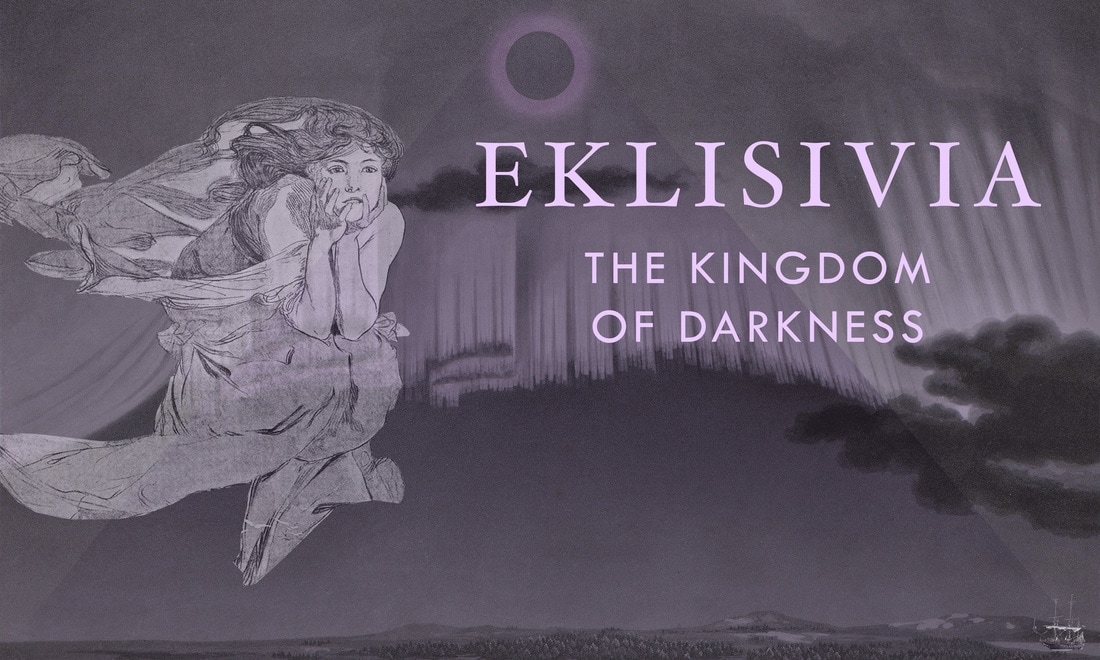 THE KINGDOM OF DARKNESS
A Cursed Land
Long before colonization of Blissdaine Naive’s western lands, explorers traveling through those uncharted waters would come home with stories of a strange land, which lay north of what would later be the colony of Mujand. Rumors circulated that the mysterious land lay in darkness and was home to flying creatures. A few stories told of vast cave systems filled with ervescent gold. Many ships sailed to find the gold, ignoring the stories of the creatures. Most of those ships failed to return home. Of the crews that made it back, few of the men would speak of their experience. Those who did, told stories of horrifying creatures. These men, ridiculed and humiliated, never sailed again. Some went insane and worse, most did not live long after returning home.

Another story from the seas tells of a sailor floating on a makeshift raft on the Tenebris Ocean, found by a Great Blytherdon exploration ship. The sailor was blind, incoherent and dehydrated. While being examined by the ship’s captain and medical officer, the sailor opened his eyes and with terrifying fear on his face he screamed, “Vuelan, vuelan...” The Captain recognized the Sima Senco language. The Sailor looked at the Captain and uttered his final words, “Mi sangre, no tome mi sangre...” The tortured sailor died.

In 1018 Captain Gid Tarrow and a crew of 33 men sailed on the good ship Kuragguza to find the legendary gold on the island known only by the name, the Cursed Land. The ship and crew vanished.

In 1029 the Andaqesh ship, Anya Qesh and its crew found the Kuragguza floating off the coast of the island known as the Cursed Land. The ship was empty. There were no signs of the crew. The Anya Qesh landed on the island and searched for survivors. Soon, the ominous darkness and the strange atmosphere had everyone spooked. Alarmed by the island’s lifeless air, the captain ordered his crew back to the ship. On his trek back to the boats the Captain spotted something that appeared to be a shelter. He called to his second in command and together they explored the shelter made from trees and brush.

In the shelter were beds built from vegetation and wood scraps. There were no signs of bodies. On one bed the Captain found a book. Upon lifting it he could see it was a journal stamped with the letters, GT. It was the journal of Captain Gid Tarrow.

This journal introduces us to the story of the Cursed Land and its mysterious secrets. Raised are many doubts about Captain Gid Tarrow's sanity.

Our journey continues sailing across the Tenebris Ocean from Andaqesh. The Officers and I agree to sail north in search of the fabled Dark Land, first recorded by Captain Copen Leenod.

* Of the six Officers and myself, only one stands opposed to the voyage to this mysterious island. Lieutenant Ferenz. I note his objection here.

Our course sent us through a channel and continued for several days until the lookout sighted a strange land. Summoned to the deck I saw for myself this strangeness, which had the crew spooked. In the distance a land was visible. To its east and its west there was light while the land itself remained in shadow.

Seeing the men’s uneasiness I assured them it was a storm. They looked to the sky noticing not one cloud visible. Doubt filled the men. I gave the order to sail on.

Approaching the shore to this land, our light changed to darkness, and the agitated waves spat at us. I ordered to sail west to find a safer harbor.

We found calmer waters and anchored near to shore. It was then the black spot covering the sun was clear to all. Like the waves, the men became more agitated. Fearing mutiny I called all together and offered an extra percentage from all intrinsic items found. This calmed nerves for the time being.

We prepared for an assent on land and within an hour we were rowing to shore. We landed and searched for a safe location to set up camp. The light was dull and upon gazing at the sun the dark was ominous. There was a full eclipse in progress. The men were at ease now. Our immediate tour of the area revealed little edible vegetation. Some berries found were eaten off the vine. This told me that creatures were on the island. I placed the men on high alert for fear of dangerous animal attacks.

The island has an ominous feel. It is a certainty this is the dark land described by Captain Leenod. I questioned the possibility that his voyage and ours both coincided with an eclipse. The length of the eclipse was puzzling. I did not share these observations for the time being.

With a temporary base completed, we set off to explore the area. I found the land with little vegetation but for the berries. We did not find creatures. The continued darkness hindered our exploration, but it was clear, few creatures or none, lived on this island.

After several hours of exploring, we returned to camp and prepared for the night. The skies grew darker. Fearing our supplies might not last long, three of my Officers and I decided that a half crew would sail back to other lands to gather vegetation and creatures to sustain us for a longer time. We will explore and map this island.

* Note: There are cave systems that contain some ervescent gold. I and my second in command, discovered such a place.

The men are fearing the perpetual darkness. Some have reported seeing large flying creatures in the dark skies. When questioned about these creatures the men who would speak, said they were flying men with large teeth. One crewman said the creature flying in the dark skies was the fabled parasitic blood-sucking creature, Dragoola.

The Officers remaining with me and I have decided we needed to monitor the rhumlo drinking.

Several days have passed, and the Kuragguza has not returned. The island which I have named, Eklisivia, remains in darkness. My crew is fighting amongst themselves. Their fear is clear. I now see that the moon persists above over the Island. One must travel to this side of the world to view the moon. In my limited knowledge of this science I can say this occurrence is unheard of or impossible. The moon follows the sun and returns to remain over the island through the day.

I have noticed a reduction in my vision. Other men report the same condition. I must refrain from peering at the eclipse.

We are growing short of supplies. We have gathered the sweets off the vines.

The men have discovered that the local seas are replete with prawn. They have fashioned nets and have gathered good supplies of these large sea creatures. This has sustained us. Several treks inland have turned up no creatures.

The flying creature sightings continue. I have not witnessed these creatures.

It is my opinion that tragedy has befallen the Kuragguza. She has not reported in 60 days. I have ordered a fire to burn through the nights.

Two men have gone blind. They are despondent and are not eating well. I fear for their health and lives.

Several men no longer hold me in high esteem and several groups have broken off from the main camp. Fourteen have stayed with me remaining loyal to their contract. I have offered them the highest percentage payment upon returning to Andaqesh. Although they doubt they shall ever return home, their allegiance to my rank is honorable.

The prawns are a tiresome sustenance.

The perpetual darkness continues and my eyes have begun a falsehood. In the darkest of the night while out on a walk along the shore I saw a light in the night sky. It hovered overhead as if it were observing me. Uncertain why, I lifted my hand in a greeting manner. Turning my attention for a moment, the light vanished. I have told no one of this experience.

Several men have fallen to blindness, insanity and despondency. But the Kuragguza has returned. She sits anchored just off the shore but no one has come for us.

The men who have stayed with me find items to build a floating plank, our smaller boats long since used for other necessities. Two men struggle to the ship.

They each return with boats to retrieve us. They report that there is no one on board the Kuragguza. It is a ghost ship.

We did not make it off the island. I write these final words from a makeshift shelter we built to protect us from the flying Dragoolas. They are real.

At first, I thought myself in a dream. A gathering of beautiful, nude women appeared as we were preparing to leave the island. A serene music came from these beautiful women and the men fell into a hypnotic state. I myself felt its power. The sensation was difficult to resist.

Without warning, these lovely women turned into vicious fanged creatures with terrifying wings. The creatures killed my men.

Those still alive ran with me as fast as we could to our shelter which will not protect us long. They will find us and

This was Captain Tarrow’s final entry. A horrifying unfinished description of their demise. Within this final page was a rushed sketch of what they were seeing, which was published in the Mujand Investigator.

The Captain of the Anya Qesh reported no creatures but reported the ominous heaviness on the island. He and his men would leave after locating Captain Tarrow’s journal.

Story Response
Gord Lester, a Chasm X truther, does not find the creature story credible. He instead believes that Captain Tarrow and his men found a large cache of ervescent gold and sailed off to unknown lands, living the rest of their days like kings.

“The account of the creatures was a diversion. A diversion that worked,” said Mr. Lester.

To this day, the creatures described by Captain Tarrow remains a mystery. It is unclear what Captain Tarrow and his men saw or if they ever saw anything. Many scholars have hypothesized the loss of their sanity towards the end of their ordeal.

The Ervescent Gold
Although some gold is on the island, the underground cave systems have never yielded the amount of gold described in several accounts.

The Eclipse
The eclipse continues in perpetuity. Astroscienteers have no explanation for this phenomenon. History does record moon sightings in other parts of the world thousands of years prior but the questions of when and why it stopped over Eklisivia are still unanswered. It is a mystery.

Today Eklisivia is a busy scientific community with corporations and governments from around the world setting up shop on the island. Evidence of these dangerous creatures eludes scienteers. The mystery survives on the island known as, The Kingdom of Darkness.
MORE STORIES:
MUJAND REPUBLIC     TERRITORY OF WEST JUNEE     THE KUNINGANNA TERRITORY     NATION OF ANDAQESH     PERISH ISLAND     PONEET ISLANDS     EKLISIVIA     SIMA SENCO