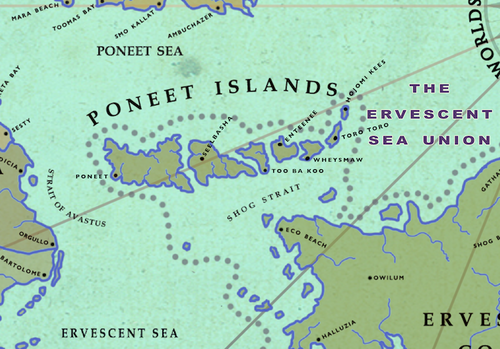 OF UNKNOWN ORIGINS
The Mysterious Visitor

According to research by The Blissdane Naive Historical Society (BNHS) the Poneetians' have inhabited the Poneet Islands for eight centuries or perhaps even longer. Where they came from however, is clouded in mystery. Most of the Poneet Island's early history has been handed down by stories told by elders and the Poneetian people regard these tales as historical fact and more importantly, sacred.

BNHS researchers are split on whether the tales told by the Poneetians have any historical value or if they are merely told for entertainment. Official Government documents regarding the establishment of the Poneet Islands either do not exist or have not been found. More curious still, is the fact that no nearby civilization has any mention of the Poneet Islands in their historical documents.

THE VISITOR
One often repeated tale is of an unknown visitor to Poneet, arriving from the ocean in a water tornado. This visitor, who they named, Tormi Jumal or Storm God, was described as a tall, thin, translucent creature with large bulbous eyes. His appearance initially frightened the Poneetians but all quickly learned that he was not a danger after he provided a miracle.

The Visitor brought forth an iridescent liquid that he offered to a Poneet elder named Aza Bah Fanti Mo, who was very ill and near death. Urged by the Visitor, Fanti Mo drank the liquid and fell asleep. Most thought Fanti Mo dead until the following day he was up and jovially moving around and seemed to glow with a youthful shine. The liquid was shared with those ill and in pain and the healing miracle was repeated.

Not much else is known about this visitor and no document or other form of communication of the day has been found. Through legend, however, it is said that the visitor brought land cultivating and harvesting advances to Poneet. Not much more is told of the reason for the Visitor’s arrival to the islands but it is told that he was very interested in their ability to grow crops. This is a very sacred issue for the Poneet People.

The legend of the Visitor departing the Poneet Islands is a bigger mystery because not one story exists.

It is these mysteries and lack of physical evidence that leads scholars to believe the Visitor is nothing more than a myth, embellished for entertainment over time.

There is one curious fact, however, the advancements in cultivating. After the advancements in cultivation, the birth of a rich, bountiful nation took hold. Year after year Poneet and its sister islands became wealthier and healthier, especially with the building of larger ships and the development of trading lanes. More and more traders would come to trade and live on the Poneet Islands and more and more of the Poneetians grew prosperous. This prosperity would bring a surprise crop to the Poneet Islands.

THE ROYALS
For centuries the Koobineeva Royal Family ruled the Poneet Islands until one day King Dayeekee Koobineeva decided that Monarchy Government was not good for the Poneetians and a Republic was established by his hand and with his blessing. The Monarchy remained a prominent fixture in the lives of the Poneet Islands but it was now mostly ceremonial and historical.

This laissez-faire approach from the Royal Family would remain just that until a young princess named Satina Koobineeva made a promise.
1997 MT - THE ARRIVAL OF TOBACCO
It happened slowly. Large tobacco companies bought up farmland, which was used for growing sweets and greens and which fed the island people. The weak Poneet Government was either ignorant or in bed with the tobacco companies and over time most of the crops were switched over to tobacco and by the time the opposition groups made a move or any noise, the Tobacco Barons took most of the rich farming land. The Poneetians would now have to import their food.

What came next was the infiltration and reestablishing of the Poneet Government by the Tobacco Barons. Their influence was deep and soon the Poneetians were on the outside of their own Government. As all were getting richer it proved extremely difficult to get the Poneet People to rise against the taking of their culture.

The Koobineeva Royal Family of Poneet was made insignificant as well. Although they remained out of public policy, they raised concern but were ignored.

Then, a new Poneet Government was established in 2085 MT. Its first official Governor was Priest of the Noothic Church, Sadre Bahn De Beleedi. He migrated with a handful of followers from Adanac Brit and quickly established himself with the tobacco firms. He easily won his race for Governor.

This angered many faithful Poneetians. The Royal Princess, Fifteen-year-old Satina Koobineeva, was said to remark to the King and Queen that she would chase the Tobacco Barons off their islands one day.

Eventually, the tobacco companies were everywhere but when the Government printed new banknotes in 2088 MT, featuring Sadre Bahn De Beleedi and other tobacco Barons, the Poneetians took notice. Included on the banknotes were tobacco and cigarette brand names and any hint of the Native Poneetians was excluded.

A movement was started.
A PRINCESS PROMISE
After the banknote incident, opposition was easier to establish and soon other institutes were joining the call to remove tobacco from the Poneet Islands. Princess Satina Koobineeva went a step further and planned and executed an attack on cargo ships bound for trade. Several tons of tobacco were destroyed and the Princess was arrested. At 20 years old, Satina was closer to fulfilling her promise to her parents.

With the princess’s incarceration it was now a matter of Poneet pride. The Princess was in the possession of the Poneet Government, which the people felt no allegiance to any longer.

Soon more cargo ships were being destroyed. Before long it was too much of a strain on business and the tobacco companies were losing the battle. In late 2094 Satina was released from prison and the tobacco companies sold their Poneet ventures back to the Poneet people. The Government legislators were next and many of the officials were on the run. Sadre Bahn De Beleedi escaped to an unknown location. (He would later resurface along with his other Poneet Tobacco cronies.)

The Poneet citizens called for the return of the Monarchy but Satina Koobineeva herself stopped the reestablishment of a Monarchy. She insisted that a new Poneet Islands Government be established and in 2095 the Poneet people elected new government officials and eventually all crops were returned to sweets and greens and tobacco was abandoned.

This did not sit well with many Poneetians who had grown wealthy because of the tobacco plant. They would remain silent for the time being. It was not the end of tobacco…